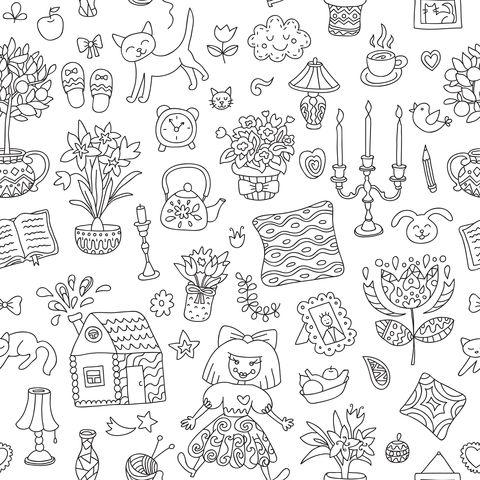 Home is where the health is

It’s housing day-eve, I work for Home Group and I’ve just read a Guardian article entitled ‘Could bad buildings damage your mental health?’ So, naturally, this is a subject I’m seriously interested in.

You can’t really write a post about the positive impact of tranquil surroundings when the UFC is blaring out in the background (Ultimate Fighting Championship for those who haven’t yet experienced the blood shed). So,  I’ve relocated from the front room to the bedroom, complete with soft lighting, comfy pillows and my adorable ginger cat, Dennis. And now I type….

Having spent many years’ living with the ups and downs of anxiety, my thoughts are often as chaotic as a ‘man drawer’ – just with fewer light bulbs, batteries and battered TDK cassette tapes. None of them work. And neither does my head when it’s in that space. Because there is no space.

Which is why the frantic house deep clean often commences on a Saturday morning. You get up to watch last night’s EastEnders and scoff your overnight oats on the sofa. But before you do, you’ll just re-make the throw. Then quickly hoover the floor. Grab the duster.  Might as well water the plants. Re-arrange the books. Line up the remote controls…

Annoying yet productive cleaning adrenaline aside, once the space is clear, it’s feet up and time to relax (by watching a load of East Londoners threatening each other’s faaaamily and dodging Phil Mitchell’s monkey wrench….).

I’m no minimalist, the house has more patterns than Laura Ashley and just as many books and candles. But the clutter and the breadcrumbs that haven’t been purposely placed where they lie do nothing to slow down my thoughts. Clearing the decks really does clear the head.

My better half fell in love with this house because of all the light. There’s loads of it. Big windows everywhere you look. But there’s one light-related thing that he just cannot abide. The BIG LIGHT. You’d think I’d deleted his entire UFC collection when I flick that switch. Hurt and angry doesn’t come close.

But there’s definitely something in needing natural light. We’ve heard of people with seasonal affective disorder (or winter depression as it’s often called) using light boxes to simulate exposure to sunlight. And let’s face it, sunlight is rarely a feature of the classic horror film setting – it’s very purpose being to unsettle us.

Alan Frog: Does the sunlight freak him out?

Sam Emerson: Uh, he wears sunglasses in the house.

(Lost Boys. If you didn’t get that you’re probably much younger than me. Alan Frog = 1980s Buffy).

Putting your stamp on it

There’s something about seeing a reflection of yourself in your surroundings that makes you relax. Beyond our bedrooms, my family has naturally taken various rooms in the house and made them their own. The spare room is littered with shoes, jewellery and hats (my cave). The study is packed with A-Level books, Paperchase stationery, empty Ben and Jerry’s cartons and Coldplay (Sam’s cave). And the garage is a fully kitted out aquarium, complete with softly bubbling tanks, tranquil lighting, angel fish and a rocking chair (husband’s cave). Even the Nichol cats have their own comfortable little spaces (Jenny at the top of the stairs, Dennis hiding under the bed. Can you tell which of my cats is of a nervous disposition?).

Which is why no matter how nice a B&B you check into, it’s not half as relaxing as waking up in your own bed.

Unless you live in Walford, this is another (mainly) pleasant feature of my home. Whether it be of the human or pet variety, living side by side with other beings is comforting (I said mainly). The familiar sounds of Chris shouting ‘hola’ to mark his arrival home from work, Sam’s iPhone constantly pinging with social media alerts, and our pet chickens crowing at us at 6am each day to be let out of the run. It’s familiar and its family – which, annoying or not, makes it rather pleasant. Mainly.

So that’s my home. With all its quirks and familiarities. The ability to make it my own. Love and support from others (most notably, Dennis the cat). Laughter. Tears. Tantrums. My hubby has always said that, for him, the home should be a place where you can shut the front door behind you and leave the rubbish outside. And he’s right. And I feel very lucky to have mine.