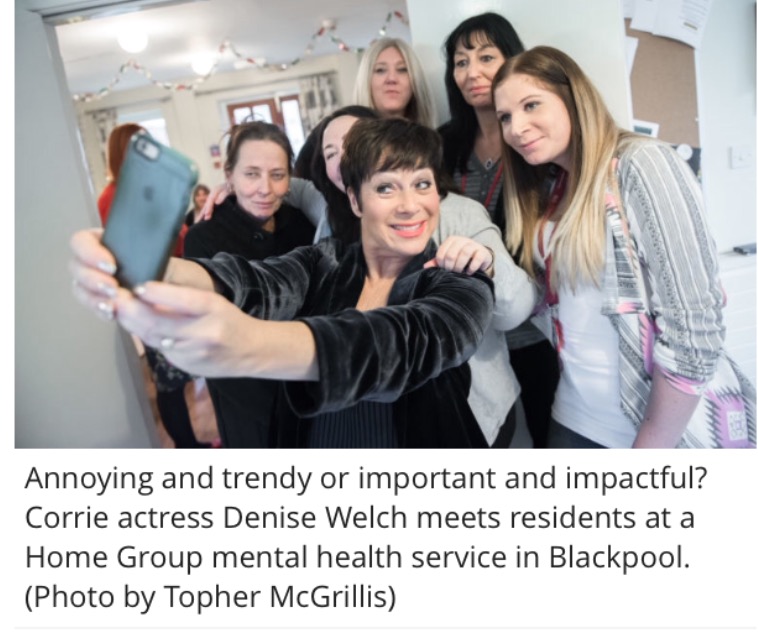 There’s a charter for those who work in PR, marketing, accountancy and HR. It’s to promote responsibility. Yet celebrities – who have a much greater influence than I have, for example, in my PR role – don’t have to sign up to anything.

So it’s kind of about trust and good will. What would you do if you had such a powerful platform? If one tweet could reach millions? If you could completely change somebody’s day? Would you try to do something to help? Or would you ridicule those who do?

It’s ironic, really, that Piers Morgan accused Denise Welch of using mental health to raise her profile. He uses his nasty pantomime act to gain attention a la Katie Hopkins. I watched Good Morning Britain one morning on the TV in the gym. It was the interview with Nicola Thorp who was sacked for refusing to wear high heels.  It was deliberately provocative, of course. Does he really believe women should wear high heels or face losing their job? Whether he does or not it’s shocking. Shocking that he believes in something so blatantly sexist or, on the other hand, shocking that he is willing to peddle such shite to draw in the ratings in a cheap and nasty Jerry Springer show kind of way.

This all came about of course because Denise called Piers out for attacking Will Young when he spoke about PTSD. Piers, as a close friend of Will Young’s and a medical professional of course, claimed he didn’t have PTSD but instead had WNTS – Whiny needy twerp syndrome. 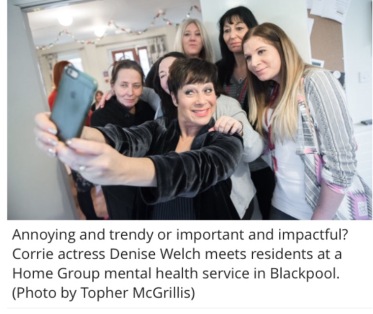 So Denise did what she is committed to doing – she spoke out against mental health stigma. And she did it without getting personal. Piers on the other hand…well, he called Denise a ‘publicity-starved bore’.

So here’s my take on a few points that I stumbled across on Twitter from Piers Morgan and his band of merry followers:

Denise’s mental health resulted in years of really shitty headlines. Attacking her for her behaviour as she struggled to cope with mental ill health through self-medication. Her profile was through the roof already – which is precisely why she experienced such heartache from the tabloids. But instead of letting it break her even more, she turned it around. She used her status responsibly. So when somebody feels strong enough to speak out and help others who might be going through the same thing, why on earth shouldn’t they?

The problem is, Twitter only sees what’s out there in public. I’ve accompanied Denise on visits to Home Group services where I have seen her spend hours chatting to people with severe mental health conditions. I’ve worried about how knackered she must be doing it. Her schedule is so demanding. But she doesn’t see it as a chore.

Yes, sometimes there is publicity that comes from it – but that’s at the request of the charity. However, some of the services Denise has visited haven’t been suitable for publicity. She’s spent hours chatting and having a cuppa and totally transforming somebody’s day. Just because.

If you need to speak out about mental health, speak to your GP in private, don’t speak to the press.

This one really annoyed me. Because the reason people are speaking out is precisely because there are people like Piers Morgan and precisely because there is mental health stigma. If they didn’t exist then people wouldn’t have to speak out so passionately. A friend of mine only approached his GP after reading Geri Halliwell’s book and learning about her experience of anxiety. It was only then that he realised that he wasn’t weird or about to be experimented on for having these strange panic attacks. So he made an appointment. Stigma breeds self-stigma. People feel too ashamed to admit they have a mental health problem. So they are less likely to seek help, and so it gets worse, and worse. If celebrities (and others) speak out, people feel that it’s OK not to be OK. Stigma might put Piers in the headlines, but it has the power to put others in hospital. It’s no joke.

Celebrities use mental health as a trendy accessory, just like a handbag

Yes of course! I wrote about this one a little while ago. It’s bullshit. And even if there is the odd celebrity who does speak out for attention, how can we prove it if we don’t know them personally? If we’re not a medical professional? And for Denise, 30 years is a bloody long time to lug the same heavy ‘accessory’ around.

How many Time to Change / mental health bloggers have heard this one? It does bug me.  I have Generalised Anxiety Disorder and so I obsess over these kind of things. But do you know what? It does help others. I’ve written about this because it does get you down. But I know for a fact that it helps others. And, at the end of the day, given that stigma around my mental ill health damaged my reputation and forced me out of a job, building my profile back up is, in my view, something I absolutely deserve to do.

I know there’s a tonne of pantomime baddie shite going on with the likes of Katie Hopkins and Piers Morgan. And I know that in giving them more airtime it only fuels it. But they are already too big. They already have the power to cause harm. So I might be a small-time blogger, but I know I am not the only one speaking out against stigma. There’s an army of us. We can’t just rely on the stars because they have so many more battles to face, as has been proved in the Piers v Denise battle of late. What must that do to somebody who already lives with clinical depression?It’s tragic, really.

So let’s keep going fellow stigma-busters. Together we can make a difference. Blog and plug and promote and media-whore your heart away. Whatever you get from it, remember that others get reassurance and support. And that can make al the difference to somebody’s life.