How to land a plane

(or, My experience of anti-depressants and other stories 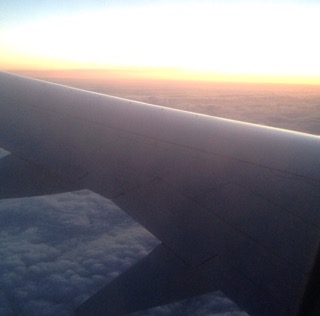 Meet Serotonin. A good mate of mine. We never used to be that close. I thought we were, but
Serotonin was one of those fair weather friends. First hint of troubled water and she pissed right off.

So when we recently formed a meaningful friendship (as opposed to a one night stand in a dodgy club where she whizzed around my brain, gave me an explosive sense of ecstasy then did a runner taking every last bit of ‘happy’ I owned) things began to change.

I have always been an anxious, short-tempered and neurotic being. But I never knew it might be due to some mysterious little things inside my head called neurotransmitters. I thought I was just a pain in the arse.

Turns out, I am a pain in the arse. But I feel much better about it now.

I was prescribed a reunion with Serotonin, a neurotransmitter, in the form of Sertraline when I was going through a particularly stressful time. It got me through it. But it also showed me that I needed to re-wire years’ of negative thought patterns and routines, because, with Serotonin, I was happy and relaxed. Of course, this is a project you have to do in partnership with Serotonin. She gives you peace and a better perspective on life. But if you want it to last, you have to put some effort in too. ‘Give a man a fish…‘, etc, etc.

My experience of Sertraline was good. It’s different for everyone, and I have heard that it just doesn’t suit some people. So I would never endorse it for others. But, for me, personally, it worked.

I was nervous, of course. I think that’s perfectly normal. I remember a friend of mine taking it for the first time. He described the anticipation as ‘expecting the sky to turn red and crack open’ when in fact he didn’t really notice much. And neither did I. Even though I kept checking my pupils in the mirror just in case they’d blown!

Let’s get it out there. The bit that, as responsible adults we hate to talk about. The fact that, in our more youthful, carefree days, many of us succumbed to a chemical-fuelled rollercoaster ride at some point or other. And what do you get for it? A half decent night that passes too quickly, dancing in a ‘higher state of consciousness’ (no doubt looking like a possessed zombie on fast forward). A place you think you can only reach thanks to the severe serotonin assault on your brain (mind you, I can’t think why anyone would choose to listen to Josh Wink sober).

Then you crash. And if you’re anything like me, prone to anxiety, naturally short on serotonin, it’s a really bad landing. So many Sundays lost to panic attacks, tears and THE FEAR.

So, with a few bad memories from the ’90s (and I’m obviously not talking about my Sun-In sprayed hair or high-waisted jeans) I collected my prescription and nervously swallowed my first anti-depressant….and waited….

Slight feeling of sickness for a couple of days. But nothing major to report. No buzz. No blown pupils. No panic. No weird behaviour (no, contrary to my initial concerns, people can’t tell you’re on them by looking at you).

But that’s precisely it. Nothing. Vesuvius does not erupt simply because someone forgot to put the rubbish out.

Don’t get me wrong, I still shouted abuse at the TV screen when Homeland killed off…(sorry, no spoilers!) and my other half still wound me up when he added to his fish tank collection in the garage and his dirty sock collection in the bathroom. But it wasn’t anger. It was mild frustration. It was relative (well, except for my Homeland response. I’m still not over that.)

Think about being in a plane and sitting by the window. You’re coming in to land. You look down and see the tiny little cars moving around, people obviously going about their business. You’re able to sit back and take things in. Observe. Think. Consider what you see, what might be happening, where people might be going and why.

On the flipside, imagine being in the centre of those cars, in the middle of a busy city. The noise, the pollution, the chaos.

To me, personally, that’s how Sertraline feels. Sitting on the plane. Being able to step back. It inhibits the angry, panicked reactions born of my overactive amygdala. I still see what’s happening, I still consider if it makes me upset, happy, angry or irritated. But I take a moment to consider my response. And in taking that moment, other people respond better to me.

And that’s the difference from the serotonin you unleash on the dance floor. I’m no scientific expert (disclaimer!!) but from my limited understanding, Sertraline, of the SSRI family (Selective Serotonin Reuptake Inhibitors) allows serotonin to hang around in your brain without it all being sucked back up into the cells where it hides. So we experience the positives that this brings. It is a steady, controlled experience.

I believe street drugs such as those with MDMA (on the other hand) flood your brain with a huge overdose of serotonin in one go, allowing you to feel wonderful for a very brief moment, before zapping it all back up and leaving you more depleted and miserable than when you started. Should have listened to Zammo, kids!

So my steady Sertraline journey had real benefits. There was turbulence, however. So I circled at a higher altitude for a while, waiting for the storm to pass. And now, here I am, ready to land again. As I write, I’m in the midst of my descent. Back down to my original ‘starter’ levels.

It’s a little bumpy if I’m honest. But it’s no crash landing. You do it bit by bit, step by step. A bungee jump over a concrete pub car park with the risk of burst blood vessels never did appeal to me. But a gentle parachute over lush New Zealand greenery with the occasional flutter of anxiety is much more manageable. As a natural worrier, I took this gentle approach to the extreme and split my pills into two, going from 100, to 75 to 50 over the course of a month.

As my levels gently decrease, I can feel flashes of anger or irritation coming into my mind on occasion. But remember that partnership work? That independent stuff you do even when you’re in the midst of your relationship with a Serotonin boost? It truly does help. Psychotherapy. Train your brain. Re-wire your thoughts. It makes for a pretty effective life jacket.