Dear Donald – my word, you’re bang on the money this time!

I read with interest your comments about the recent shooting in Florida. 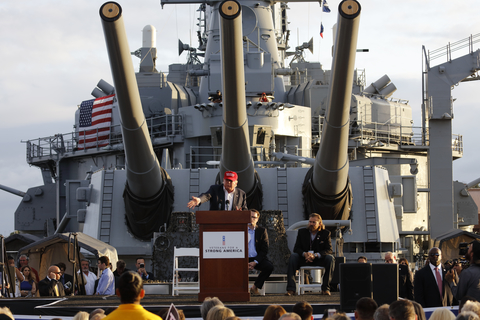 I can understand your concerns about mentally ill people. I myself live in a country that, according to statistics, has a higher prevalence of mental health issues than the US (in the UK, apparently 1 in  4 of us are ‘crazy’ whereas in the US it’s just 1 in 5).

Having a higher prevalence we are subject to some terrifying ordeals. Our great tradition of tea drinking is dangerous in the hands of the mentally ill. They keep using the tea irresponsibly. Sitting around in groups and discussing their ‘feelings’. Being open. It makes people a bit uncomfortable. It’s not what being British is about – just ask Katie Hopkins!

And we have highly active societies that recruit high profile individuals to spread propaganda about mental illness. They lead us to believe that people with mental illness are vulnerable. Normal even. Human beings they say! Bah!

They are trying to catch us off guard. They think we’re stupid. If only we had your nous.

These people are a threat to our freedom and the long-standing traditions that make our countries great. Forget Obama’s free health care (I mean, if you can’t afford it, you should stay in the house with a bottle of bleach and a gas mask – you can avoid illness if you try hard enough). Forget the NHS. Forget Erin Brokovich and Anita Roddick. They’re nothing to be proud of are they? For a start, they were well passed their ‘checkout’ time weren’t they Donald. Let us not forget your wise words – women are quite simply useless over the age of 35.

What’s important to us (and we speak on behalf of the majority of course) is the freedom to drink a cup of Yorkshire’s finest tea in peace and walk around the local park brandishing a loaded firearm. It’s our right isn’t it?

In the States, its a small number of mentally ill people who ruin it for everyone else who simply fancies using guns for fun. It’s a tradition for God’s sake! They say gun violence would go down by a whopping 4% – let me repeat that – 4%!! – if mentally ill people were dealt with appropriately. The other 96% of violent gun crimes are insignificant and probably FAKE NEWS anyway.

So I do empathise because of the similarities. Imagine an England without tea? Imagine an America without guns?

Our money would dry up. Even a slight increase in helping the mentally ill would pale in comparison to the votes, business deals and donations that would be lost if you gave in to US public opinion and banned guns like that irresponsible predecessor of yours.

In 2016, according to the FAKE NEWS, a whopping 57% of Americans supported a weapons ban. Nonsense! The media ran that story. And we all know they are never to be trusted (except your reputable friends at Fox News – which is where our two countries’ traditions differ – because foxes are deemed evil in the UK by some highly respectable citizens who wear red jackets and blow bugles. They get grief too for simply trying to go about their business by ripping things to shreds).

The fallout would be huge. Those evil democrats would rejoice in the peace it would bring.

So yes. Deal with the mentally ill. It will solve everything for you and you will get to keep all your special golfing friends and donations and campaigning. And we all know that having you as president is absolutely for the greater good. It’s absolutely with the best interests of the US at heart.

Bloody UK law – making it so hard for me. I’ll probably just have to have a cup of tea instead.

To find out more about why we shouldn’t brandish people with mental health problems as violent, weak or scary, head over to Time to Change – I promise you, this is NOT fake news.

Add A Series of Unfortunate Stereotypes to your Goodreads lists.